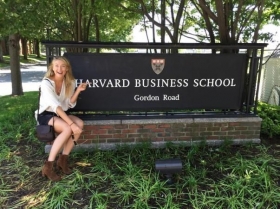 Maria Sharapova squalificata per due anni

It is not that Maria Sharapova doesn’t have a college degree: She doesn’t even have a high school diploma. She has been in tennis ever since her little hands could hold a tennis racket. And it is only for a very short time in her life that this 6’2″ sex symbol had hands that were little.

Her fingers are sexy. Her hands are sexy. Everything about Maria Sharapova is sexy.

She won Wimbledon at the age of 17 and so she didn’t live the life of a normal adolescent. She never went through regular schooling. Not even basic schooling. For her to win Wimbledon at age of 17, tennis had to become her entire life around the age that a normal girl begins her first full day of school.

But for Maria Sharapova it was precisely the time that she began her tennis journey. As well as the journey into beauty and sexiness. But no man obsessed with her beauty when she was that age would ever admit it. Surely she still remembers the glances of men who looked at her inappropriately. When she was far too little to be looked at that way.

Now that she is 29, no one has any problem admitting that she is sexy and beautiful. But her intense sexuality doesn’t just bring men to their knees. It brings Harvard to its knees.

Before we get into the problem for Harvard, let us first mention two problems for Maria Sharapova. First, the entire world now knows that her doping appeal, the legal appeal that she said she was pursuing, is a complete fabrication. If she was pursuing that appeal with any sincerity, she would have waited for a verdict on her appeal, which is expected around July 18, before embarking on a course of study. The job of the lawyer that she has hired is exactly the opposite of what we have been led to believe. His job is to make sure that the outcome of the appeal comes down firmly against his client. It is her intention to retire. Maria Sharapova wants to retire from tennis by way of suspension.

But we must forgive her. She is a beautiful female athlete suffering from the awful stigma of being uneducated. They don’t come any shallower than Maria Sharapova.

The problem for Harvard is that they are admitting a gorgeous beauty who sounds thoroughly uneducated every time she opens her mouth. She is as sexy as can be when she talks, but every time you listen to her you wonder whether she can write a complete sentence, or whether she can read or understand an entire paragraph.

Certainly not any paragraph in any Harvard business textbook. She is clearly far from ready to pursue a course of study at Harvard. Even an executive program. There is little doubt that even these short executive programs have a college degree as a prerequisite. And Maria Sharapova doesn’t even have a high school diploma.

Harvard has clearly decided that her exceptional beauty more than makes up for her lack of prerequisites. For Harvard, no previous educational requirement is required when the applicant is as beautiful as Maria Sharapova. Harvard certainly knows beauty when it sees it.

It appears that Harvard has its fair share of the male professor who will readily sign the required paperwork that allows a beautiful girl to register for his class without having the prerequisites for the class. No male professor has ever had too many girls who are willing to undress. For some strange reason, there is never enough girls who are willing to get their grade for the course by getting laid. No professor ever complains of too many college women wanting to do an “A for a lay.”

Nor is it a money issue for Harvard. Harvard didn’t admit Maria Sharapova because it wants her money. Harvard doesn’t need Maria Sharapova’s money. The Harvard Business School has an annual endowment that is over three billion dollars.

And that’s because Maria Sharapova has a lot more to offer than money. And now we see that it is not just men who have testosterone. The lifeless rock-solid walls of Harvard are overflowing with testosterone. Testosterone that has been brought to the boiling point by one very beautiful athlete. The gorgeous and sexy Maria Sharapova has given the lifeless red bricks of Harvard a rock-solid erection.

Harvard has succumbed to the intense beauty of Maria Sharapova. The sticky white substance that holds the bricks of its walls together is beginning to melt.

The benefits to Harvard are clear. The Harvard Business School has a faculty of 200. Harvard wants to keep its faculty happy so that they remain at Harvard. Adding money to their salary is never enough inducement because the business faculty is largely comprised of men and women who have made their mark on the business world and are already wealthy. Others make more money by their expert consulting activity. So money is not an issue for the Harvard business faculty.

If Harvard wants to keep and recruit the best possible faculty it has to be innovative in its non-monetary inducement. Now it has Maria Sharapova. She will provide enough inducement for its present faculty to stay. And for prospective faculty to come.

And so Maria Sharapova will be there just long enough to sleep with every single member of the Harvard business faculty. Yes, both men and woman. It is not just men who desire this woman. Every woman on the faculty would surely want to experience the joy of bedding Maria Sharapova. The distinguished female members of the faulty want to go down on Maria Sharapova. And they want Maria Sharapova to return the favor.

The Harvard male faculty would surely want to experience the buttocks of Maria Sharapova. Highly accomplished men are known to have a powerful sex drive. And every member of the Harvard male faculty wants to go deep inside the buttocks of Maria Sharapova. They would love to experience her bottom in all the various ways in which her bottom can be experienced. Surely for the taller men they want her standing up with her back to them. In front of a mirror they would be able to see the agony on her face as her tight Russian buttocks are slowly conquered. And in the mirror she will see the look on their faces as they reach complete ecstasy. Surely she will feel a sudden wetness as her Russian bottom gets filled up.

Her luxurious bottom is like the gas tank of her expensive Porsche. Both get their filling. Both get filled to the top.
The genius of the Harvard recruiters is that they asked themselves a very simple question: Would having sex with Maria Sharapova be enough of an inducement to keep our best faculty?

They arrived at the right answer. If anyone has ever wondered what Maria Sharapova will be doing with her time after tennis, the answer is now clear: She will be sleeping with all two hundred members of the Harvard business faculty. One at a time.

An interesting question is how many she can do in one day. I would say three men and two women. Women take longer.

So she needs to be at Harvard for about six weeks. Many of their executive programs run for about that length of time.

This is the beginning of a long and mutually satisfying relationship between Harvard and Maria Sharapova. She will release the tension inside the intensely driven members of the Harvard faculty. And they will do the same for her. If they are satisfied with what she has to offer, she will be back. She will be back for more education. And she will be back for higher degrees. Maria Sharapova would love to get an MBA from Harvard. And she would love to get her Ph.D. from Harvard.

Maria Sharapova and Harvard Business School is a union made in heaven. Surely that’s how the Harvard faculty sees it. It is a relationship that will last a long time. Harvard has much to offer Maria Sharapova. It has executive programs. It has an MBA. It has a Ph.D. Education is something that Maria Sharapova has a desperate need for right now. At 29, she suddenly realizes that tennis has robed her of so much. She can forgive tennis for just about everything it has taken from her. Except one thing: education.