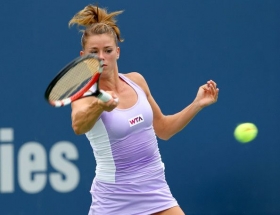 Camila Giorgi’s talent has never been in question. The same, too, can be said for her ability to summon this talent on the big occasion.

However, going into the 2014 season, the enigmatic Italian was still struggling to locate the consistency that turns talent into trophies.

Arriving in Indian Wells at the start of March, Giorgi had won just a handful of matches, looking more likely to drop out of the Top 100 than rise to a position befitting her wizardry with a racquet. Buoyed by a couple of wins in qualifying, she dispatched a couple of Top 50 players, Andrea Petkovic and Sorana Cirstea, to set up a fourth round meeting with No.4 seed and defending champion Maria Sharapova.

Seventy-four places separated the players on the tennis ladder, but it was clear early on that Giorgi was in no way daunted by the challenge in front of her. If anything, she relished it.

In a battle of shotmakers, the players racked up both winners and unforced errors as they split the opening two sets. In the decider, Giorgi surged into the lead only to be pegged back to 5-5. She was not to be denied, breaking to love before serving out for a famous 6-3, 4-6, 7-5 victory.

“It was a really good match – it wasn’t too consistent, but it was great anyway,” Giorgi said. “I just tried to play my game and keep going, and even if I missed, I still played my game. I didn’t change.

“I think I was just playing more aggressive than her at the end and that was really important.”

At times, Giorgi, who produced 24 winners – as well as 11 double faults – in her two and a half hours on court, was unplayable, and Sharapova paid tribute to her conqueror: “I think if she played at this level for a consistent period of time, I don’t think she’d be a qualifier here. I think that’s pretty obvious to everyone.

“It’s a big challenge. It really is. But if she keeps it up, she will be a good player.”

“However, going into the 2014 season, the enigmatic Italian was still struggling to locate the consistency that turns talent into trophies.”