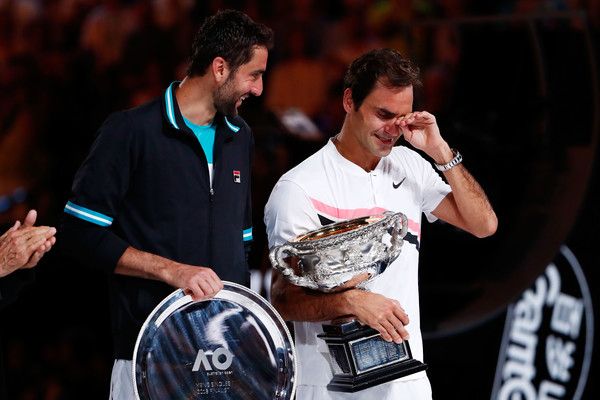 “RF 20! What an incredible achievement! And to do it in this era! Congratulations Roger!”.

It was an extremely marginal call by the referee to close the roof, but the decision will have been taken in the knowledge that Simona Halep was treated in hospital for dehydration after the women’s final.

According to the Australian Bureau of Meteorology, the humidity in Melbourne was significantly lower for the start of the men’s final than it had been 24 hours earlier. But it was five degrees hotter – a stifling 37 degrees – when Federer and Cilic got underway.

The index was hovering right on the threshold to trigger the extreme heat policy when the players began their warm up, and therefore the referee was able to exercise his discretion to close the roof.

It was a surprise when the news filtered through ahead of this night time final. It was an advantage for Federer, given his prowess indoors, and he has also benefitted from being able to play six of his seven matches at night in each of the last two years.

But as someone who takes the view that the roof on the three main courts should be closed more readily (and play halted on the outside courts) on these extreme Melbourne days, then it is hard to argue against it when the threshold is finally breached.

During the first week of the Grand Slam, players battled through two days of 40C heat fully exposed to the conditions, as organisers declined to invoke the heat policy.

However, the Australian Open said the referee’s decision on Sunday was based on “qualified and professional advice from the Bureau of Meteorology and the tournament’s chief medical officer” at Melbourne Park.

The humidity at the start of the match, measured using the Wet Bulb Globe Temperature, was 32.6 – exceeding the threshold of 32.5.

“At no other time during the event this year has the WGBT reading reached the threshold,” organisers said in a statement.

But it was a decision that was still met with disdain from those watching the final.

Former British number one Greg Rusedski added: “Absolutely ridiculous that the roof is closed for the Australian Open. Grand Slams are outdoor events. Yes it’s hot but the court is under shade and an evening match.”

“The way Roger plays, he swings so hard at the ball and takes it so early, any wind or variation of the ball moving will take it away from him.

“It’s why he’s one of the best players ever indoors.”

Federer said he was “surprised” by the ruling, but that playing indoors did not affect his preparation.

“I was surprised to hear they had the heat rule in place for a night match,” said the 36-year-old Swiss. “I never heard that before.

“When I arrived to the courts, I was totally ready to play outdoors. They told me they were thinking it will probably be indoor. Then they kept me posted along the way.

“Half an hour before, we got the word that it’s going to be indoors. For me, it doesn’t change anything in the preparation, to be honest. I was ready for either.”

Marin Cilic says it was difficult to adjust to conditions at the Rod Laver Arena after Australian Open organisers closed the roof for the men’s final.

Temperatures of 37C would not normally invoke the extreme heat policy (40C), but organisers said the humidity was behind the decision to close the roof.

“Mentally it was tough,” said losing finalist Cilic about the roof closure.

“Throughout the tournament I played all my matches outdoors, also preparing for a hot day, 38 degrees. Then first match for the final to play with the roof closed, it’s difficult.

“I have to say that decision, could it have been different? I guess so.

“It was just a little bit difficult to adjust, especially the beginning of the match. With the roof closed, it was way, way cooler than I expected.

“That was very, very difficult, especially for the final to be in that kind of a situation.”