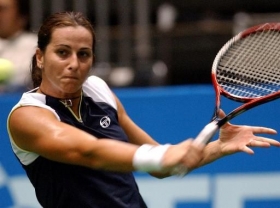 For a long time there was a barrier, a barrier many Italian players touched but never crossed – that is, until a very bright young talent from Brindisi busted through it a few summers ago.

ROME, Italy – With several Italians breaking into the Top 10 over the last few years, one might think it has been like this forever. But for a long time there was a barrier, a barrier many players touched but never crossed – until a bright young talent from Brindisi busted through it a few summers ago.

Though Raffaella Reggi and Sandra Cecchini had broken into the Top 20 in the late 1980s, it wasn’t until 2002 when Italy really started knocking on the door of the Top 10, as Silvia Farina Elia took her classic all-court game and gorgeous one-handed backhand all the way to three WTA titles – all on the clay courts of Strasbourg – and all the way to a career-high ranking of No.11 in the world.

Just one spot away from the Top 10 – but unfortunately, Farina Elia would go no higher.

Fast forward a few years to 2006 and another Italian with a classic all-court game and a gorgeous one-handed backhand – Francesca Schiavone – got up to a career-high ranking of No.11 in the world as well. We all know there was a lot more to come, but for a time, she too would go no higher.

Another Italian – Flavia Pennetta, a more modern style player with a big serve and big groundies – was the next to join the club, reaching No.11 a few years after Schiavone on February 9, 2009.

The curse was about to be broken – for seven years No.11 was a roadblock for Italian after Italian, but after a 15-match winning streak that brought her back-to-back titles at Palermo and Los Angeles and to the semifinals of Cincinnati, it was Pennetta who finally broke the barrier, moving up to No.10 on August 17, 2009, becoming Italy’s first ever female Top 10 player – they had already done it on the men’s side, with Adriano Panatta and Corrado Barazzutti both doing it way back in the 1970s.

“This means a lot – everyone was expecting this from the beginning of the year because I was No.11 in February, and they were talking about it all the time,” Pennetta said that day. “It’s a dream come true. I always hoped to be one of the best players in the world, and now I’m there. It’s just crazy.”

It’s amazing what one player’s breakthrough can inspire – in the years that have followed two more Italians have cracked the WTA’s biggest elite, and gone higher even, with Schiavone making the Top 10 after winning Roland Garros in 2010 (and eventually going as high as No.4) and Sara Errani cracking it after her Roland Garros final in 2012 (and this week setting a new career-high of No.5).

There’s another one in waiting – Roberta Vinci set a career-high of No.12 just last month – and Italy is a doubles powerhouse too, with Pennetta, Errani and Vinci all reaching No.1 in the team discipline.

Needless to say, once that barrier fell, the Italians sure came charging through…