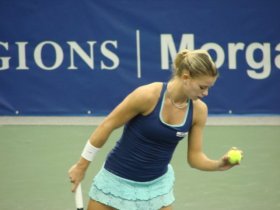 Frustrated after losing her match, Great Britain’s Heather Watson slammed her racket onto the ground, breaking it in two. While a ball girl picked up the pieces after the loss, Italy’s Camila Giorgi gathered her things and calmly walked off the court and into the China Open main bracket.

Giorgi, currently ranked 95th in the world, upset the 78th-ranked Watson to move on.

In the first set, Watson’s gritty determination paid off as she pulled from behind to win. After breaking Giorgi’s serve in the ninth game, Watson won four straight games to take the first set.

However, at the start of the second set, the momentum shifted to Giorgi. She broke Watson’s serve in the first game. While Watson was able to rally well and often throughout the match, Giorgi was able to sew up games when it counted and took the second set 6-2.

“You need this,” Watson told herself on the court before she drew even at two game seach, but it wasn’t enough. Giorgi steamed forward winning four straight.

Throughout the final set, Giorgi dictated play with the athletic, but tired, Watson chasing the ball around the court.

Watson came close to Giorgi several times throughout the match, but she wasn’t able to execute on game and break points. Instead she often grew frustrated and banged her racket on the court.

The 20-year-old Giorgi first cracked the top 100 this year, rising up to 89th in June, but since falling to 95th. Watson, for her part, cracked the top 100 last year. Currently, she’s ranked 78th, the second-highest ranked British female after Laura Robson. This is the first visit to the China Open by both Giorgi and Watson.

In her first match, Giorgi will face fellow Sara Errani from Italian, the seventh in the world .

Dai questa no … Proprio Sara no !!

due diversissimi stili messi a confronto…